I have implemented a minimal decision learning mechanism inspired by the cortex-basal ganglia-thalamus loop as part of my effort to create brain-inspired cognitive architecture.

It is based on the following hypothesis:

Reasons for the hypothesis

The hypothesis would be corroborated from the following:

Output predictor: learns to predict action from the observed inputs and the executed action as supervisory signals.
A two-layer perceptron was used for the implementation.

Output moderator: calculates its output with the output of the predictor and noise input.  As the predictor learns to make correct predictions, the contribution of the noise decreases.  Specifically, the rate of correct task answers was used as the probability of using output prediction.

Output selector: selects the largest output (winner-take-all) from the moderator and gates its output with the Go/NoGo signal from the BG.

Reinforcement learning for the Go/NoGo decision was performed with the cortical input and its potential output as states. 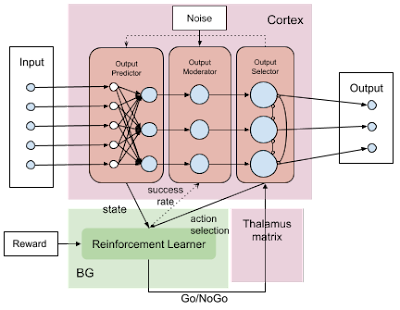 The task for testing

If action other than [0,0] is made within the presentation period without meeting the reward condition above, a negative reward is given for the "wrong try."

BriCA (Brain-inspired Computing Architecture) was used to construct the architecture.  BriCA is a computational platform for brain-based software development (see [1] for its significance).

PyTorch is widely used as a machine learning framework.

For learning the basal ganglia, a frequency-based method was also used.

The ideas in "Minimal Cognitive Architecture" (in this blog) was used to combine BriCA, Gym, PyTorch, and TensorForce.

Fig. 2 shows the results of the training.  As for RL algorithms, VPG (Vanilla Policy Gradient), A2C (Actor-Critic), and PPO (Proximal Policy Optimization) are used as they are available in TensorForce. 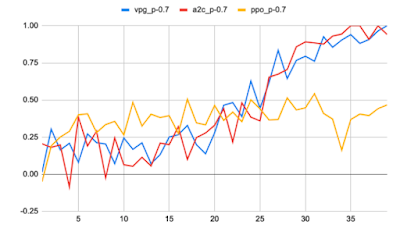 Fig.2
Horizontal axis: The number multiplied by 100 is the number of episodes.
Vertical axis: Average reward for Go
Penalty = -0.7
For VPG and A2C, the average reward approached 1 after 4,000 trials.
In PPO, there was no apparent learning (reason unknown).
When no penalty was given, RL algorithms always chose Go, so learning was not successful. 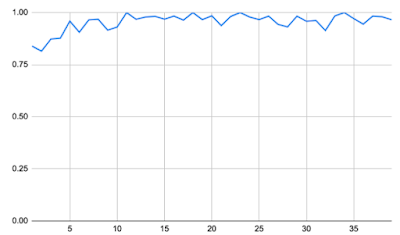 Fig.3
Horizontal axis: The number multiplied by 100 is the number of episodes.
Vertical axis: Average reward for Go

The results of learning the task with reinforcement learners are shown in Fig. 4.
As the number of actions per episode was set to one with the results in Fig.3, the experiment was conducted with only one step for the presentation period and no reward delay.
As reinforcement learning algorithms, VPG, A2C, and PPO in TensorForce, were used. 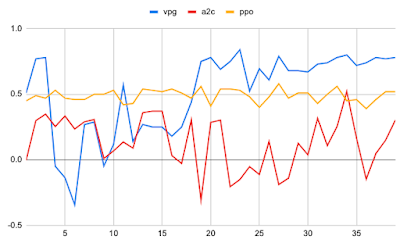 In Fig. 4, VPG performed better.  However, learning was not generally stable (e.g.,  PPO also worked when the presentation period was set to 3 steps and the reward delay was set to 2 steps).

A two-layer perceptron (with PyTorch) was trained with the observation and the executed action choices.  The task performance rate was used as the probability to use cortical output prediction for Go/No judgment in the BG part (if prediction is not used, the output candidates are randomly determined).

Since the learning rate of the perceptron was small compared to that of the reinforcement learner, the input was multiplied with epoch loops by hundred, which resulted in proper learning (Fig. 5).

As a loss function, Binary Cross Entropy (which is considered to be suitable for binary classification tasks) was used.  As the optimization algorithm, Stochastic Gradient Descent (SGD) was used, and its learning coefficient was set to 0.5 (through trial and error).

Fig. 5 plots the change in the loss value with the frequency-based learning for training the BG part.  The loss value decreases in a manner that follows the BG learning. 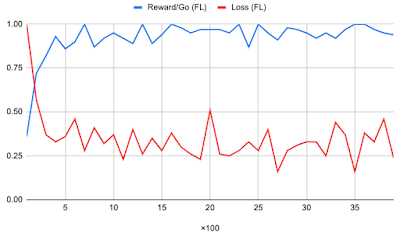 The interior mechanisms of the basal ganglia and the thalamus were not implemented, so they cannot not be evaluated.

While the cortical implementation consists of three parts (output predictor, output moderator, and output selector), there is no evidence for their biological plausibility.  Nonetheless, as the cerebral cortex codes output, input-output mapping must take place somewhere inside, and output is related to at least Layer 5.  There are also findings that output is gated by Go/NoGo signals via the basal ganglia and thalamus.  In the implementation of the output moderator, random selection of noise and prediction was used.  It could be a homework for neuroscience to find a functionally similar mechanism in the brain.

If action choices are coded in (mini-) columns, inter-column lateral inhibition (for winner-takes-all) could be found, which I have not found in literature.

The task performance was used as the probability to decide whether to use prediction in the implementation of the cortical part.  This assumption would not be unreasonable, as dopaminergic signals are provided to the biological cortex.

A question to be asked is whether the mechanism works in more complex tasks.  It will be tested in tasks requiring working memory or with more practical perceptual input, for which an architecture that includes models of particular cortical areas and other brain regions will be required.

It is said that accumulation of evidence takes place in action decisions in the basal ganglia [3][4].  When dealing with uncertain input or multiple types of evidence, the accumulation mechanism should be introduced.

In addition, the Drift-Diffusion model discussed in the literature [5][6], modeling the trade-off between taking action and understanding the situation (making a choice at the expense of accuracy under time pressure), will also need to be implemented.